June 10, 2019
Like 0 Thanks! You've already liked this
Faces of Heart Failure 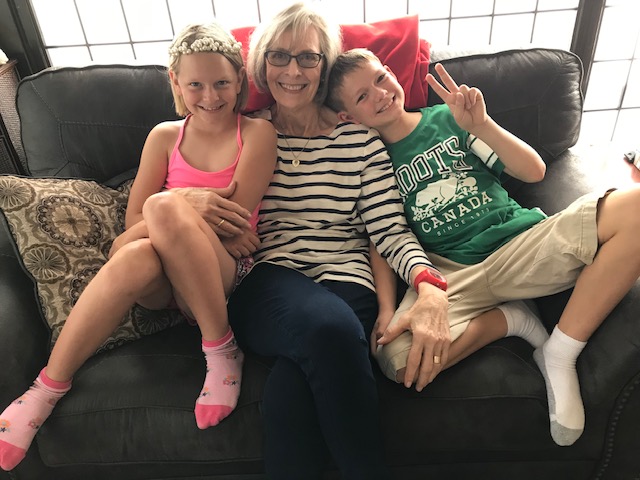 Mid-December 2008:  It was sunny day in Southern California.

I leashed up our dog for a quick midday walk around the block.  We walked at a brisk pace, rounding the curve at the end of our street to slow down for the climb uphill on the next.  I said “hello” as we passed our mail carrier and turned the corner to head back home.  We had walked only a few steps when I felt a sudden rush of light-headedness, something I’d experienced for a couple of weeks and reported to my family doctor.

“Don’t worry about it,” she’d advised.  “You’re probably dehydrated.  Drink more water.”  I stopped to take a breath, then everything went dark.  When I came to, I was lying face down on the sidewalk, bleeding from the chin, my dog obediently sitting by my side.  Somehow, I managed to get to my feet and walk home.  I was unnerved enough to call my husband at his university office.

“A funny thing happened while I was walking the dog. I passed out…”  My head began to buzz.  “Oh….” I mumbled, collapsing on the floor.

I heard my husband’s voice, “Sharon?  Sharon? I’m coming home…”  A few moments later, the phone began ringing.  I managed to get to my feet to answer it.  It was a 911 operator telling me the EMTs were on their way.

Within moments six — I reiterate — six very good-looking young male EMTs burst through our front door while I, embarrassed and confused, attempted humour.  By the time they got me on the stretcher and in the ambulance, I knew something was wrong.  I was admitted for observation and tests, and three days later, a cardiologist came to tell me that I had been diagnosed with heart failure.  “You mean a heart attack?”  I asked, panicky and teary-eyed.  I had no idea what heart failure was, and I was frightened.  The next day I was again transported by ambulance to a cardiac care center to have an ICD inserted in my chest and admitted to a different hospital for three more days.  New terms, including dilated cardiomyopathy, atrial fibrillation, and ventricular tachycardia were added to my medical record.

No one had fully explained what heart failure was, what caused it, how it progressed, and or how it was, ultimately, associated with hospitalizations and mortality.  I’d already had a brush with near death as a teenager, and perhaps I was unwilling to accept what being a heart failure patient meant.  The brief and reassuring annual follow-up and doctor’s oft-repeated “you’re doing fine,” allowed me to stay in denial.  I worked with cancer patients after all, many of them with terminal diagnoses, and I was humbled by their strength and courage.  The irony, of course, was that the seven weeks of radiation therapy I had undergone in 2000 as part of the treatment for early stage breast cancer was likely the culprit behind my heart failure.

That was over ten years ago, and as someone who continues to live with heart failure, I’m doing relatively well.  Two years ago, my husband and I returned to Toronto, and I had the good fortune of becoming a patient of Dr. Heather Ross, MD, a remarkable cardiologist and leader in heart failure care.  The level of care and information I now receive has increased substantially over what I experienced in California.  It was, I admit, a bit of a shock to discover that my heart failure had worsened, that I have thromboses are on a heart valve and lead wires of my ICD, and he number of medications I take more than doubled.  Periodically, I take a break from reading the research on heart failure, because it can easily depress me, igniting those little shadows of fear, the ones about early mortality.

But all in all, I am one of the lucky ones.  I dance (not well, but enthusiastically); I spend time with my Toronto granddaughter; I walk often, albeit not as fast as I once did, in this wonderful multi-cultural city, taking in the music, arts and culinary delights it offers.  I continue my work with cancer patients, better able now to understand the fears that come with a serious illness like cancer or heart failure.  I’ve served on a provincial committee on heart failure care and am now part of the Patient Partner program at Toronto’s UHN.   And I write, exploring the lived experience of heart failure — not just the physical one, but also the literary, emotional and spiritual ones, just as I ask the cancer patients in my writing groups to explore the impact of cancer on their lives.  I have been creating a blog for this purpose (www.heartmusings.ca), hoping it might inspire other heart failure patients to write and share their stories.

I intend to live as fully as I can for as long as I can, caring for my heart as best as I can, but not taking myself too seriously either.  Laughter is also one of my medicines, and if you were to pass by our apartment door on most days, you might hear me belting out the beginning lyrics of a Johnny Cash song,  “I keep a close watch on this heart of mine…” (“I Walk The Line,” 1957).

Congratulations to the Astronauts that left Earth today. Good choice

Most of us feel like we’ve coped pretty well during self-isolation so far, but the real challenges arise when the hardship has been around for a while, when it has ceased to be new, obviously meaningful or even interesting, says @ncolier. #COVID19 https://myheartsisters.org/2020/05/24/nancy-colier-pandemic-wall-covid19/


You are our teachers, advocates, protectors, careg

Not all Heroes wear capes. We thank you for being

Meet Jillianne. Diagnosed with #HeartFailure at 28

Meet Pegga. She thought she had asthma. Diagnosed

Meet Antonella. At 28 a new mother and wife + diag

Meet Sunny. Diagnosed with #HeartFailure at 18. To

Today is the first day of #HeartFailureWeekCan and

There is still space for our #HeartLifeDay tomorro

Join us on TOMORROW, April 17th for a FREE virtual